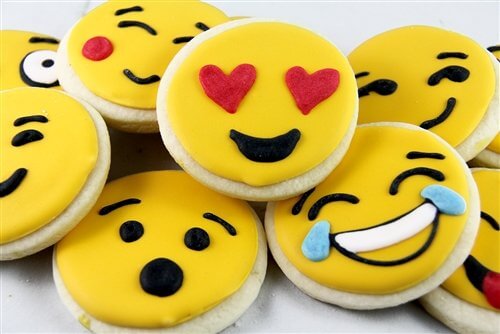 They say a picture paints a thousand words, and not much has changed. Throw a couple of emojis into the mix, and you’ve got yourself a text message (without any text, mind you) that miraculously seems to make sense.

It’s sunny, football is on, fancy a BBQ?

The fact we’ve now been seeing the growing popularity of the smiling piece of poop icon quite possibly shows the progression from the long-favoured colon and bracket, to the more sophisticated (or not so sophisticated?) emoji keyboard. If we cared to take a look, I think we’d all struggle to find a conversation thread on our phones that didn’t show a message slewed with of smiley faces, in one’s attempt to spice up the discussion. And now we’ve apparently become so incompetent at scrolling through the list of emojis that our keyboard feels the need to hint at us what icon we could use in relevance to our text. Just in case we felt that the word ‘golf’ isn’t sufficient enough, we now apparently need a small putting-hole-and-flag icon to go with it.

It is thought that people send over six billion emojis a day worldwide, with different languages and cultures fairing different trends in the use of their most popular emojis. Though it might sometimes feel as though we’re in the depths of the world’s despair, it’s consoling to know that 45% of the messages studied showed that happy emojis, including winks, kisses, smiles and grins, were the most popular overall. However, we’re all still a step behind the French, whose emoji users are the most positive with their choices, with Malaysia flailing behind as the least positive in their emoji choices.

We are by no means complaining about our growing use of emojis to express our emotions via text message; we can no longer count how often the laughing/crying face has saved us from turning what sounds like a rude text message into one of a joke. Or how the overestimated innocence of the aubergine icon has turned into a good enough explanation as to why your friend disappeared from the bar last night.

The art of romance may have disappeared, as “I love you” becomes substituted with an emoji, and knowing the sentiment is real when the yellow heart is substituted for the red heart. That’s love right there. But in case you’re struggling to strike a cyber conversation up with the person you like, an emoji might just help in overcoming those times we’re at a loss for words. So for that, we must thank you, Swype and Kika, for saving the art of stimulated conversation.

Pop-punk legends get into the Xmas spirit!